Living Mulches in an Arable Rotation

Oakbank have been looking at ways to include a “Living Mulch” in an arable rotation for a number of years and we would like to thank Roger Davis and his team at Indigro for their collaboration with this work.  Some of you may be familiar with this concept, but for clarity let me explain what we are talking about.

We consider a living mulch to be an understory that grows harmoniously with the main cash crop, providing some or all of the following benefits:

Getting the seed rates of both the cash crop and the living mulch well balanced at the establishment phase is critical. If the mulch is drilled too thick it will inhibit the yield of the cash crop but too thin and it won’t do as good a job as a mulch.  It is important to also appreciate that our intention is to keep the mulch alive for 5+ seasons, so the benefits will accrue over that time and perhaps beyond.

Oakbank has been growing mixtures of species for a number of purposes over many years, so we used our experience to rule out overly complicated solutions in order to see if we could make this work with a simple combination. We settled on using small leaved white clover for the following reasons: 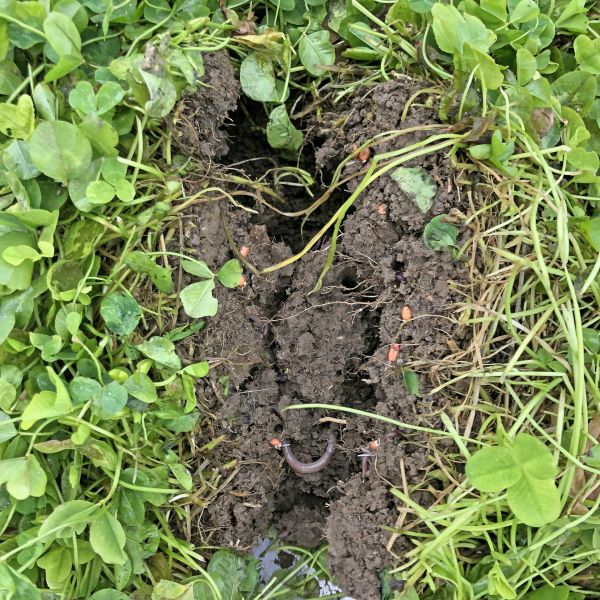 There are a number of varieties that we consider suitable for this work, including Aberace, Galway and Rivendell (the latter is the one that we have most experience with), but there may be others coming through the pipeline. It is very important to use a small leaved variety, as these give the biological and rooting benefits, with significantly less crop competition, resulting in higher yields from the cash crop.  They have the disadvantage that the grazing / forage yield is significantly lower.

Establishment: Oakbank first used this technique with oilseed rape in 2017, at the Sky Agriculture trial site. We mixed 3kg/ha of Aberace Clover with the rape seed and drilled it as a simple mix using the Sky Easy Drill.  This worked very well and both crops grew perfectly together, although we did encounter some weed challenges.  The great advantage of this method is that it allowed the clover to be established without any great effect on the OSR crop, apart from the choice of herbicide and that does need to be carefully considered on a field-by-field basis.

Our work with Indigro has looked at using the living mulch in a cereal rotation on heavy land, where blackgrass is a real problem! The establishment of the initial site was done in spring of 2020 after a particularly wet winter and spring.

Roger Davis from Indigro takes up the story. “We decided to sow the clover on its own, as the sowing window for a successful spring cereal had passed on the heavy soils. After a light cultivation the clover was broadcast on the surface and rolled. We opted to use the small leaved white clover variety Rivendell, at a seed rate of 15kgs/ha, which resulted in an extremely consistent establishment across the trial fields.  Sheep were used to graze the crop in late summer 2020 which provided excellent forage. The sheep were removed to allow the weeds to establish before glyphosate was applied at 1.5L/ha. The glyphosate application knocks the clover, the stress then releases some of the fixed nitrogen, providing a natural starter fertiliser to the establishing winter wheat which was sown in early October. Establishment was incredibly easy. The clover provided a ‘green carpet’ on which to travel, a disc drill was deployed and did an excellent job. The clover is stoloniferous and in our experience a tine drill has the potential to rip the above ground roots and encourage soil movement and therefore weed germination. The soil structure, its colour and smell changes very quickly once the clover is established and the worm counts go through the roof!”

So, with the soils starting to come alive we can then look at the other advantages of having a living mulch. “Indigro has carried out numerous trials looking at reducing various inputs, Roger continues. Herbicide costs have dropped dramatically and we are less reliant on large stacks of residuals for blackgrass control for example. Targeted rates and timings of glyphosate provide a robust and relatively cheap way to start the weed control program, allowing the living mulch to compete against further flushes. We have trialled a range of herbicides, both pre and post emergence, contact and residual, most with good results. The idea is obviously to reduce the use of herbicides to a minimum, but it’s useful to know what we have in the armoury if required. It’s also worth noting that on many farms utilising this practice we have eliminated the use of insecticides.”

Another area requiring immediate attention is nitrogen. With the recent hike in fertiliser prices and the pressure on the industry to reduce its nitrous oxide emissions – permanent understory of white clover may provide some of the answers. Indigro has carried out trials looking at reducing nitrogen inputs and utilising the ‘free’ nutrient provided by the living mulch. Roger says, “there are some exciting new products entering the market, such as the foliar poly N products which allow reduced N rates and provides an efficient method of getting nutrient into the plant. We are also looking at precision technology to enable more accurate decision support when reducing rates. The work is ongoing, and we have some interesting results as far as nitrogen use efficiency and yields, plus the positive impact on our carbon footprint.”

There are many advantages of having a permanent living mulch from increased soil health, reduced soil and water movement, cleaner water, all year-round sequestration of CO2, reduced carbon footprint, grazing opportunities, increased soil biology, reduced pesticide and nutrient inputs all leading to increased gross margins and long-term sustainability. For those looking at transitioning into more regenerative practices this method is a great way to start the process.

It is early days and we have learned lessons for the future, but progress has been very encouraging.  The work is being replicated on other farms and we are working on how best to establish the clover under a successful spring cereal, without compromising the yield too much.  Our combined work is on-going and we are looking at various drills and row spacings, cereal and clover seed rates and varietal choice, direction of drilling to see the effect of light interception, continued monitoring of soil health and nutrient levels and implications on yields, inputs and margins.